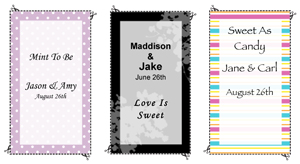 Okay everyone, I hope you are ready for the latest free templates! I am really excited about these. I  have been thinking a lot about favors and how they can be so expensive. That’s why I created these templates. These are labels for Tic-Tac boxes. I created the labels in Microsoft Word, so they would be easy to edit.

The Word documents are attached below, and they are fully editable. But before we get to them, have you heard about us? We are Bridal Party Tees, and if you want to make hilarious custom tank tops for your Bachelorette Party, then you have come to the right place! We hope you check us out. Now onto the labels…

1. Peel off the original Tic-Tac label. You may need to use a warm wash cloth to get all the glue off but make sure you don’t get any water in the box.

2. Choose from one of the Bridal Party Tees design templates. You can edit the text in Microsoft Word.

3. Print out on 8.5×11, white full label sheets. You can buy these at any office supply store

4. Cut along the dotted line.

5. Peel off back and place on the bottle in the desired location. This label is sized to fit on the front or back of the Tic-Tac box. 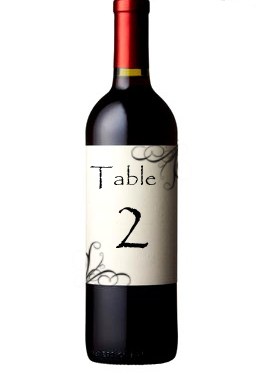 Brides, we’ve updated this post with great wine label design templates that you can edit yourselves! See the DIY instructions and files below.

Finding table numbers that are not going to fly away at an outside wedding can be a challenge. That is why I created these wine bottle labels. These wine bottle labels serve double duty at a wedding. They tell the guests where to be seated as well as treating them to a nice glass of wine. The best thing about these table numbers is that even if the guests drink the whole bottle, they are not going to fly away!

DIY:
1. Soak your bottles in a full sink of warm water, or you could use a tub to do many at a time. Soak for about an hour, then peel off original label. Scrub off remaining glue.
2. Choose from one of the Bridal Party Tees Wine Label design templates. You can edit the table number text in Microsoft word to make as many as you need.
To recolor in Microsoft Word: Click on the design to activate it then click on the format tab and then the recolor drop down menu. You can pick custom colors to recolor the background or the design and then you can change the live text to match.
3. Print out your chosen wine label template on 8.5×11, white full label sheets. You can buy these at any office supply store.

4. Cut along the dotted line.

5. Peel off back and place on the bottle in the desired location. Wedding rings have been exchanged as couples exchange their vows for centuries, and in so many different cultures that no one seems to know the origin of this practice.  Obviously, many assume that the shape of the ring (a circle) is indicative of undying love and the continually renewed vows of the married couple.  The circle is also associated with the roundness of the heavens, as well as the return of the seasons.

Rings generally have magical roots, appearing in magical tales, and folklore.  Spells and incantations for the protection of the wearer ate common in themes.  Today, in traditional wedding ceremonies, the rings are blessed by a priest or other religious leader, continuing the symbolic practice of giving the rings protective powers.

Wedding rings are most commonly worn on the third finger of the left hand.  There are several speculations as to why this is.  One reason could be because the Romans believed that a vein ran directly from this finger to the heart.  Another is that the left hand was considered less “pure” than the right, and so wearing something religious and blessed on that hand “draws” the evil out.  It could also symbolize the couple’s willingness to publicize their union in broad daylight.

So there you have it! If you have ever stopped to think about why exactly we use rings to declare our love and fidelity for another, ponder on the historical background of the wedding ring.

Hey Bridal Party Tees Fans! Great News! Starting on Monday December 14, 2009 we’re going to be giving away up to 10 t-shirts a week for one lucky Bridal Party! Sign up is really easy, all you have to do is sign up for our email list at the bottom of the home page. 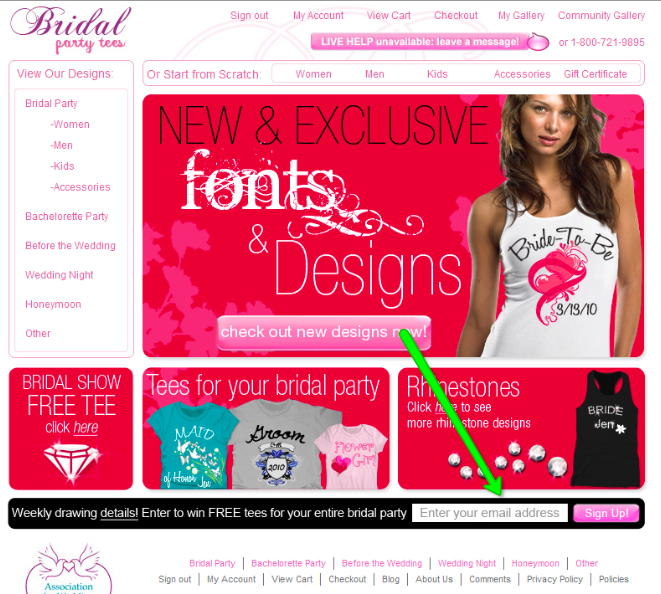 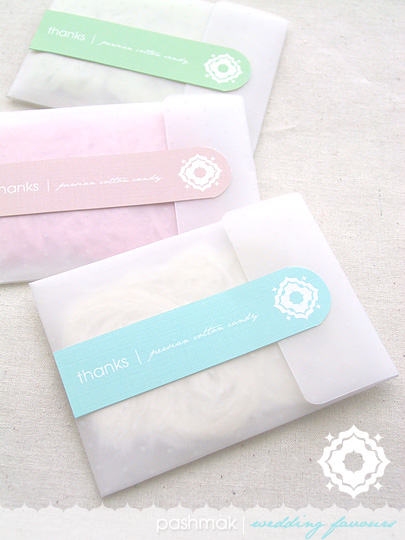 I am absolutely swooning over these Persian Cotton Candy favors from Eat Drink Chic! Not only are these favors perfectly packaged, they are filled with an exotic treat! Persian Cotton Candy, which is also know as Fairy Floss or “Pashmak”, is a gourmet cotton candy that resembles soft wisps of hair. That is why it looks so awesome in these translucent paper envelopes! Persian Cotton Candy is available in various colors and flavors are filled including Rose, Pistachio, and Vanilla. Any of these flavors would make for a wonderful treat, that is sure to make a lasting impression on your guests! Head on over to Eat Drink Chic and download a template for these super cute envelopes and labels. Plus, you will find step by step directions to help you through the whole project. Check it out! 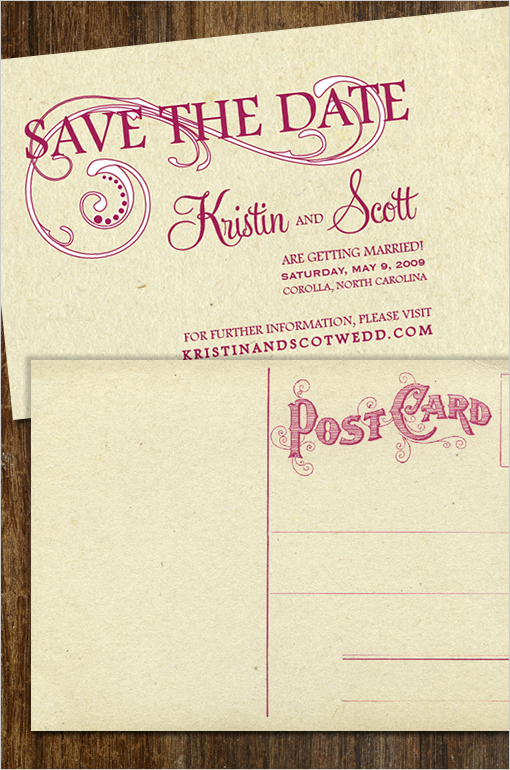 I have to say that I am simply obsessed with all the  templates you can find on the Wedding Chicks blog. Like this breathtaking Save the Date postcard. This is such a fun and unique save the date that guests will really enjoy. I also, love the vintage feel of the postcard. I am sure all of you vintage lovers are simply swooning. I know I was! To get this template simply click here to be re-directed to the Wedding Chicks blog! 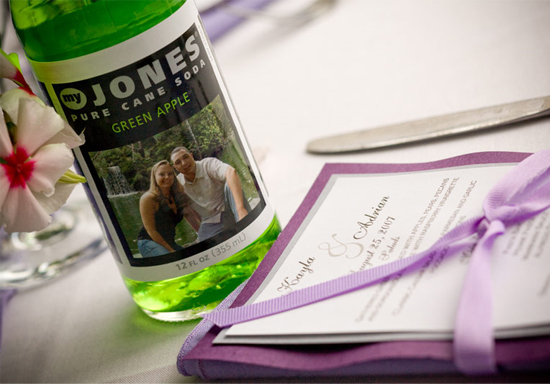 As you know, I am a big fan of personalizing the small details of your wedding. That is why I love how Jones Soda allows you to personalize your pop labels. These would make for great wedding favors or as drinks for your guests. They would be absolutely perfect for a casual outside wedding. However, I think I would really like them for a soda bar. You can get a variety of flavors all personalized with different pictures of the couple or images that play off the theme of the wedding. Then arrange them into an old fashioned soda bar with a unique modern twist. I love it! You can personalize your soda on the Jones Soda website. The soda is about $29 for a 12 pack. Start Designing! 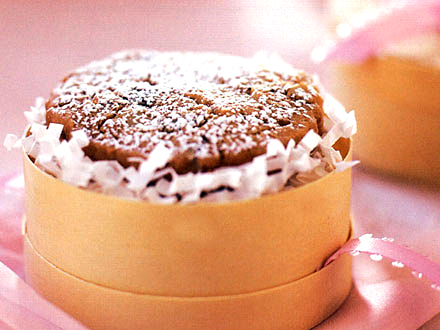 Looking for a great favor idea? Then look no more! Here is a great recipe I found on  Epicurious. Originally from Michele Adams’s and Gia Russo’s book Wedding Showers: Ideas & Recipes for the Perfect Part, this is one recipe that is sure to make an impression. The best part is that these cookies are made with ingredients that most of you will have already in your kitchen. They also give you the directions for creating this adorible packaging as well. Also, this recipe makes about 3 dozen cookie, so keep that in mind while you are preparing. Get the recipe and favor box directions!

Are you having an ice cream bar at your wedding? If so, check out these super cute labels from Eat Drink Chic. I LOVE them! I don’t think I need to say anymore. They simply speak for themselves! To download these cute labels click here to be redirected to Eat Drink Chic.

Here is another fabulous template from Martha Stewart. To create this favor cone you just need the  favor cone template and directions, crate paper, card stock, a high quality printer, ribbon, and some goodies to stuff in the cone. These make an absolutely gorgeous favors. Stuff them with candies, nuts, or other goodies. These would also make great holders for bird seed or rose petals for your grand exit. The possibilities are endless! Have fun and enjoy. To get the directions and template, simply click here.