1. Gift Bows Over the Door: It is believed that you should hang all of the bows from your wedding gifts over your door for a full year after you wed!

2. ‘Til Death do Us Part: If the bride’s wedding gown rips on the day before her wedding the marriage will end in death. (Gasp!)

3. Never Make Your Own Dress: It is bad luck for a bride to sew her own wedding dress. It is believed that each stitch she sews will equal the tears she cries over her marriage.

4. Lucky Day: The Victorians believed that the luckiest day to marry is on the day of the week that the groom was married, and that it was even luckier to be married on his birthday!

5. White Dress: Wearing a white dress on your wedding day actually has nothing to do with virginity. In the past, white cloth was very expensive to bleach and more than one bleaching was required. So, the whiter the cloth the more expensive wealthy the bride’s family was. Some symbols of virginity are actually the bride’s hair being worn down, or orange blossoms or a wreath of flowers worn in her hair.

6. No Knives, please: In the Jewish tradition it’s bad luck to receive knives as a wedding gift. In case someone should give knives, the bride should transform the exchange into a financial transaction by giving a penny or nominal sum for the knives.

7. Stand-In Bride: The bride is never supposed to practice walking down the aisle, even during rehearsal, or it will bring bad luck. The most popular alternative is to ask a close friend, or someone in the wedding to be your “Stand-in” bride.

8. Here Kitty, Kitty: A week before the wedding have a house-cat eat out of your left shoe for good luck.

9. Rosary Beads: If it is raining the morning of your wedding, hang rosary beads on the clothesline. One bride swears by this superstition. On the morning of her wedding it was absolutely pouring, so she hung a strand of rosary beads on the clothesline and by the time everyone was dressed and ready to go the sun was shining and the rest of the day was perfect.

10. The Last Name on the Shoe: The bride is supposed to have all of her bridesmaids sign the bottom of her shoe before the wedding. At the end of the reception, the bridesmaid whose name is worn off the most is the next to marry!

So there you have it! You already know not to let the groom see you until you walk down the aisle, to have him carry you across the threshold, and all of the other “staple” wedding superstitions, but if you’re looking for more ways to ensure that you have good luck on your wedding day just follow these simple superstitions. Enjoy!

Today I want to shine the “Bridal Party Tees Spotlight” on one of our brides named Tanika! Tanika created these tees for her bridal party (and herself) to wear to her bridal shower. Tanika said, “I wanted each bridesmaid and maid of honor shirt to reflect the valuable role they have played in my life.” They say things like, “Wedding Coordinator”, “Official Side Kick”, “Shy Friend”, “Ride or Die”, “The Bride’s Home Girl”, and other really cute titles! Such a sweet, thoughtful gift for the important women in her life!

Tanika chose to make her bridal party designs in turquoise and white-her wedding colors! Her bridesmaids loved the tees, and it looks like they all had a ball wearing them. Looks great ladies! 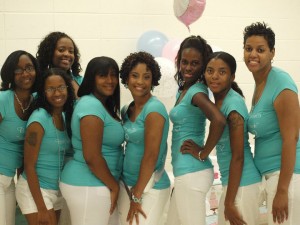 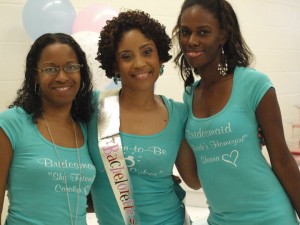 Jackie Bouvier Kennedy: What “Iconic Bride” list would be complete without the legendary Jackie Kennedy? This is the woman who captured the heart of then U.S. Senator John F. Kennedy and became the First Lady to the 35th President of the United States. Jackie became a style icon, and her wedding dress is the most photographed in U.S. history. Even today her elegant style continues to inspire women of all ages. 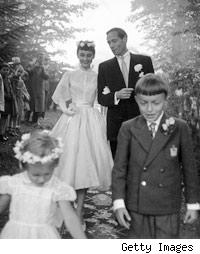 Marilyn Monroe: Marilyn Monroe is known for her sultry screen image, but when it came to her wedding attire for her marriage to baseball legend Joe DiMaggio, she chose a dark brown suit accented by an ermine collar and embellished by a delicate corsage of white orchids. The couple exchanged vows in a judge’s chambers in San Francisco City Hall on January 14th, 1954. 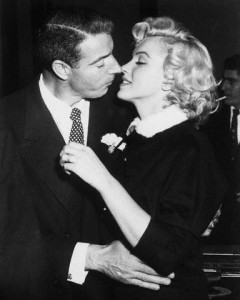 Grace Kelly: When American actress Grace Kelly married Prince Rainier III of Monaco in 1956 it was dubbed the “Wedding of the Century”, and is still considered one of the most beautiful weddings ever. Kelly’s gown was designed by Helen Rose, who had dressed her in “High Society” and “The Swan”. The gown was the most expensive dress that Rose had ever made.

Elizabeth Taylor: While the famed actress has been married eight times, it was her marriage(s) to Richard Burton that have her on our list. Liz married Burton first in 1964, then again in 1975. For their first marriage, the couple made an unannounced journey to Montreal where they married in a low-key ceremony on March 15th, 1964 in the Ritz Carlton Hotel. The bride opted to wear an empire-style chiffon gown in daffodil yellow. In her hair, the star wore lilies of the valley and white hyacinths. 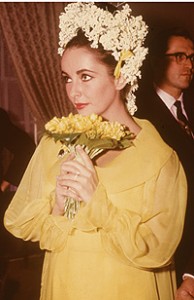 Priscilla Presley: This woman married “The King”. Iconic enough? The wedding between Elvis and Priscilla Presley took place on May 1st 1967 in one of the most decadent suites of the Aladdin Hotel, Las Vegas. Despite the fact that the couple was so famous (or maybe because of) the ceremony only lasted eight minutes! The couple’s first dance was reportedly to “Love Me Tender”, and sadly the marriage only lasted six years. 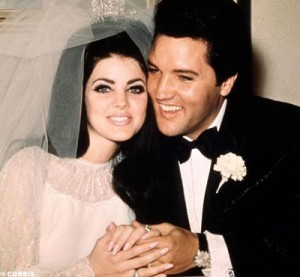 Yoko Ono: While no one could say that Yoko Ono made for a conventional bride, none could argue that she was an iconic one. For her wedding to John Lennon in 1969 in Gibraltar, she wore a short mini skirt, knee socks, and sun hat. And that’s nothing. For the honeymoon, the couple retired to the presidential suite of the Amsterdam Hilton and remained there for seven days for what they called a “bed-in” for world peace. Go figure. 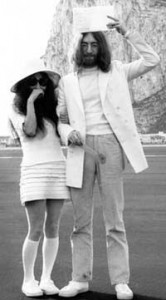 Bianca Jagger: Bianca Jagger met Rolling Stones front man, Mick Jagger at a Rolling Stones party in France in 1970. In 1971, the two wed in French Riviera town St. Tropez in a civil ceremony which took place in the town hall. This may not sound too “iconic”, however just think about it. This woman got Mick Jagger, infamous ladies man, down the isle. They were married only seven years, but still. 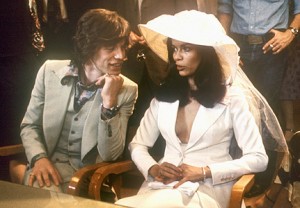 Princess Diana: When you think of iconic weddings, there is no doubt that the image this princess bride comes to mind. Diana Spencer wed Prince Charles of Whales in 1981. The gown was created by David and Elizabeth Emmanuel, and was made of ivory silk and taffeta and featured 10,000 hand-sewn pearls and sequins. It also had a 25-foot-train, and drew gasps from the crowd as Diana entered Westminster Abbey. 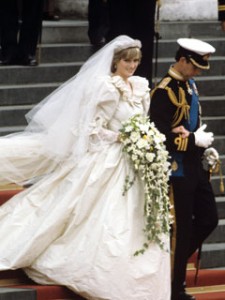 Carolyn Bassette Kennedy: Carolyn Bassette married JFK Jr. on September 21st 1996 in a simple ceremony on Georgia’s Cumberland Island with only 40 guests. While she may not have been as well-known as her famous mother-in-law, she was certainly able to channel some of her legendary style on her wedding day. The bride chose a simple yet chic white sheath dress by Narcisco Rodriguez, complimented by a sleek bun and red lipstick. 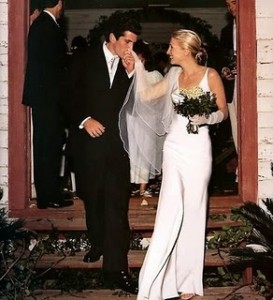 Victoria Beckham: David and Victoria Beckham wed on July 4th,1999, and was widely hailed as the wedding of the year. The ceremony was held at Luttrellstown Castle in Ireland and was attended by her fellow Spice Girls (Minus Geri Halliwell) and many other stars. Posh wore a dramatic champagne colored Vera Wang gown and David dressed in all white. The pair looked stunning on their special day and are still a driving focal point in the media today! 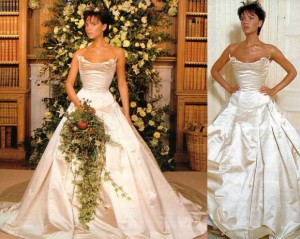 Courtney Cox Arquette: Famous “Friends” actress and her “Scream” co-star David Arquette wed on July 3rd 2000, and they’re still going strong! Not bad for a Hollywood wedding, eh? Courtney’s dress was unique, as she opted for a dress with full-length sleeves at a time when you rarely see a bride in anything but a sleeveless gown. Courtney’s gown was a Valentino design, and was simple and stunning with a plunging neckline and crisp white silk, accessorized by a bouquet of red roses.

Jennifer Aniston: Who could forget the famed marriage between “America’s Sweetheart” Jennifer Aniston and Hollywood Heartthrob Brad Pitt? Although their divorce is almost as famous as their marriage, Jen still made a gorgeous bride! Aniston’s dress was designed by Lawrence Steele, and was a full-length white silk tulle halter dress studded with tiny pearls. The $1 million dollar ceremony was held on July 29th 2000 in a Malibu Mansion. 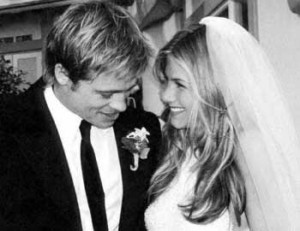 Gwen Stefani: On September 14th 2002, No Doubt lead singer Gwen Stefani wed rocker Gavin Rossdale at St. Paul’s Covent Garden in London. Stefani wore a custom-made pink and white wedding dress by John Galliano, accented by an antique lace veil. The ceremony included only a handful of family and friends. The bride arrived over an hour late with her father Dennis in a white Rolls Royce, while the groom waited patiently outside with his sheepdog Winston! 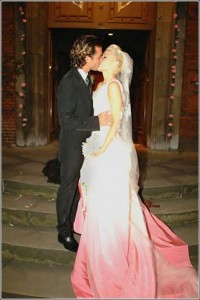 Liv Tyler: Although Liv Tyler took a low-key approach to her wedding gown for her marriage to Royston Langton in 2003, she looked simply stunning in her empire-line Alexander McQueen dress. Beautiful.

Melania Knauss Trump: On January 22, 2005 Melania Knauss wed Donald Trump in Palm Beach Florida. Melania wore a $100,000 Christian Dior gown with over 1,500 hand-stitched crystal rhinestones and pearls, and had a 13 ft train, a 16 ft veil. All in all, the dress took over 1,000 hours to make! Donald and Melania’s lavish ceremony was certainly one for the books! Then again, when “The Donald” is the groom, who can be surprised? 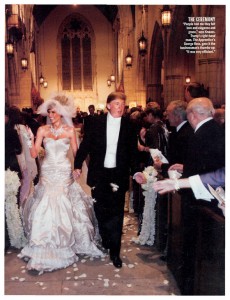 Katie Holmes: Katie Holmes confessed that when she was younger she always dreamed of marrying Tom Cruise, and in 2006 her dream came true! Their wedding ceremony took place at Odescalchi Castle in Italy (although Scientology vows were exchanged privately in CA days before this ceremony as Italian law does not recognize Scientology vows as legally binding). Katie’s dress was an Armani design fit for a princess and suitable for her fairytale wedding in a castle to her prince! 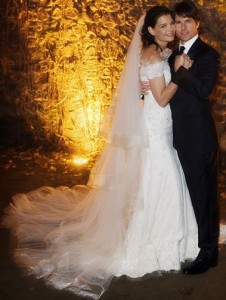 Liz Hurley: Elizabeth Hurley’s wedding to Arun Nayar in 2007 was a celebration with multiple ceremonies that reflect the couple’s backgrounds. Their first ceremony took place in Sudley Castle in Gloucestershire with Sir Elton John walking the bride down the isle, and then continues with Hindu ceremonies in Mumbai and Jodhpur. With so many ceremonies, Liz found herself in need of more than one dress! The most photographed however, was a swan-like gown by Donatella Versace. For the Indian ceremonies, Liz wore couture sari’s that were also designed by Versace. 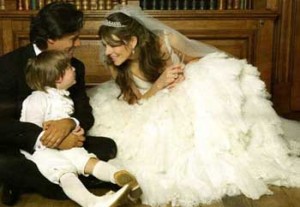 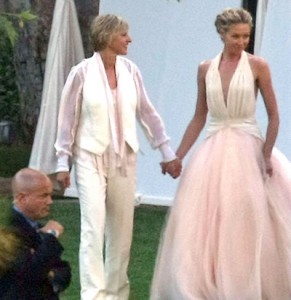 Ivanka Trump: In October 2009, Ivanka Trump said “I Do” to upcoming real-estate mogul Jared Kushner in an over-the-top Jewish ceremony in New Jersey. The bride wore a Vera Wang wedding gown, designed to resemble Grace Kelly’s, a $45,000 hair clip, $130,000 diamond drop earrings, and a $90,000 Art-Deco inspired bracelet from her own jewelry line. 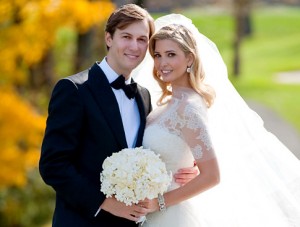